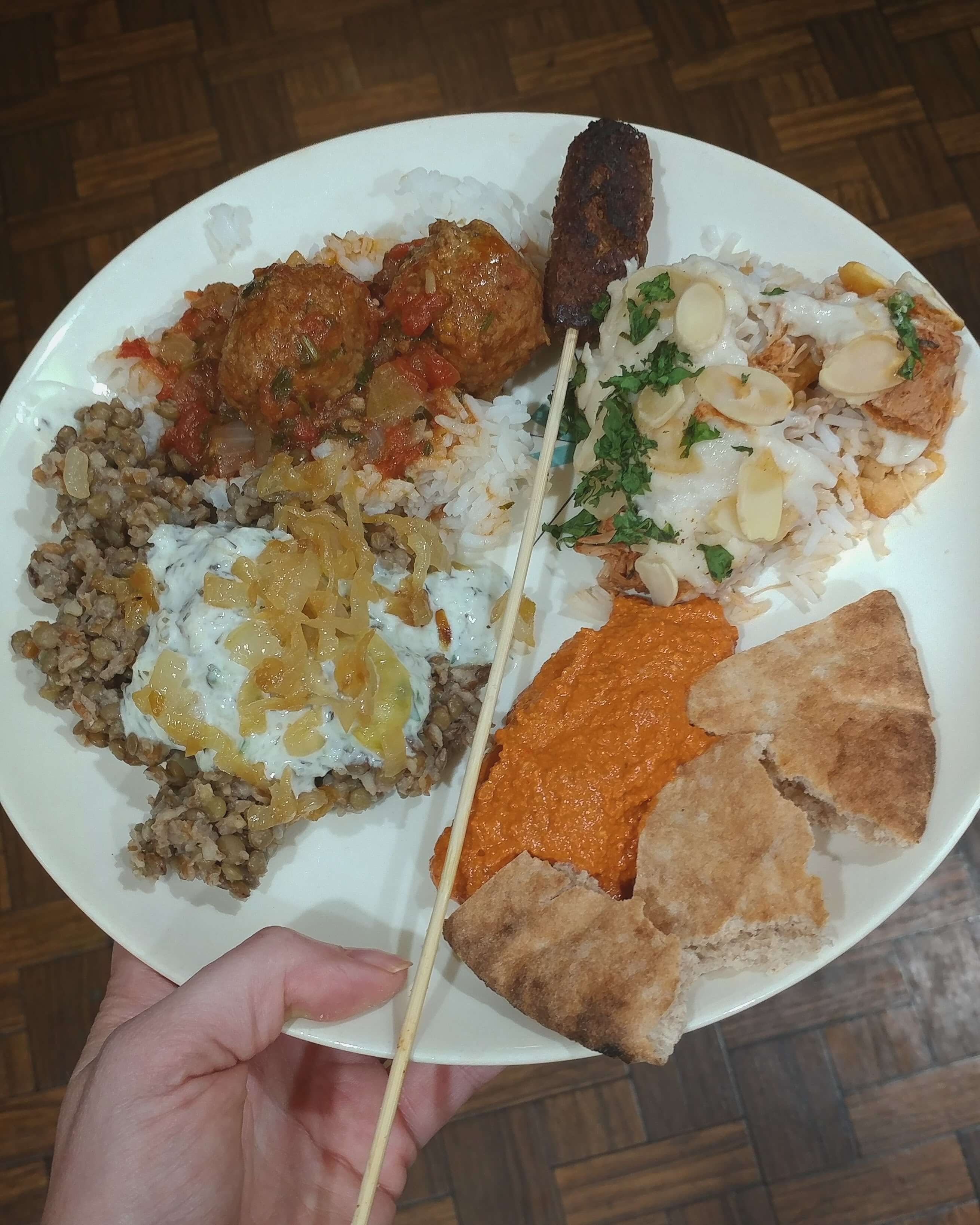 This week we cooked some yummy Middle Eastern foods by way of Syria. Sometimes I am not sure if I want to keep this simply a food blog, or explore some of my feelings about the holidays, cultures, or relevant current events that are going on in the area we chose. I would love to use this opportunity not only to eat new foods, explore and develop as a vegan cook, but also to learn about geography, history, and what is happening currently around the world. As for Syria I am ignorant on purpose, because, what can I do? It’s easy to not know. I can just to hear a headline or two and tune out, but do I want to know? Do I want to feel the pain? I want to help. I can’t understand a world where these horrible things are happening, and we are doing nothing. Where I am doing nothing. But what can I do? Should I dive in and learn? Should I continue not take on that burden and go about my life with the pains and burdens that are naturally mine already. I don’t know what to do. Every now and then I listen to a story about the people from Syria. The innocent, the children. The images that I have seen, I think about them every. single. day. I thought maybe this week I would sit down and educate myself on what is going on there. Why this is happening, what is being done to help, what is not being done to help…but I did not.

Weltschmerz (Velt Shmerts) – World Pain (German) It is also used to denote the feeling of anxiety caused by the supposed ills of the world. I am suffering from this big time. 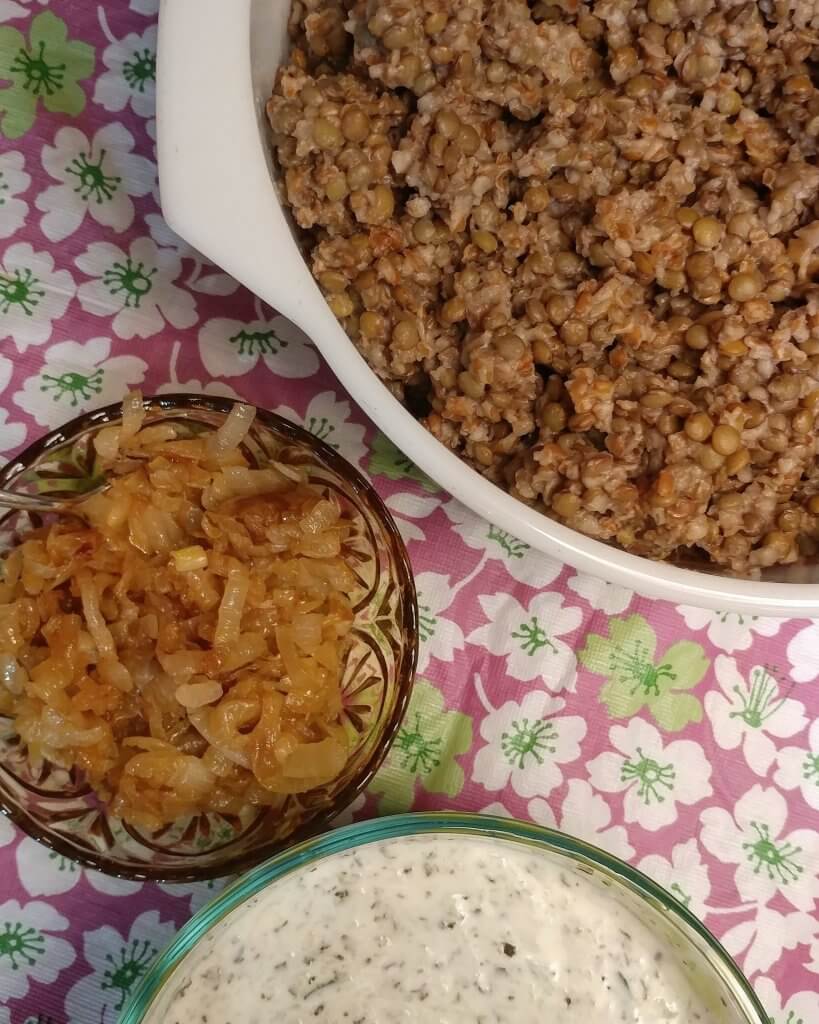 This dish was excellent. I got the recipe from Zena n Zaatar and pretty much followed it exactly. Lentils and Bulgar and boiled together, and not really seasoned, but lentils just taste so dang good they didn’t need it. Together with the caramelized onions and delightful cucumber sauce made a really good combination. It made a TON. We made this Thursday, at least 10 people ate from it, and it now being Monday and we are still working on the leftovers.

Tonight I made a Meal Mentor dish of Pizza’d Lasagna, but did my own take and made more of a Penne Pizza Casserole. It called for just spinach inside, but I like sausage pizza, so I used some of the leftover lentils mixed with a little ground fennel to make my own pizza like creation.

Had a few of these already. Stuffed a pita with the leftover lentil and Bulgar that I added some peas to, then topped with the cucumber mint yogurt, fresh lettuce and roasted bell peppers. Maybe I’ll freeze the rest….or tofu scramble, we shall see, maybe I’ll remember to update. 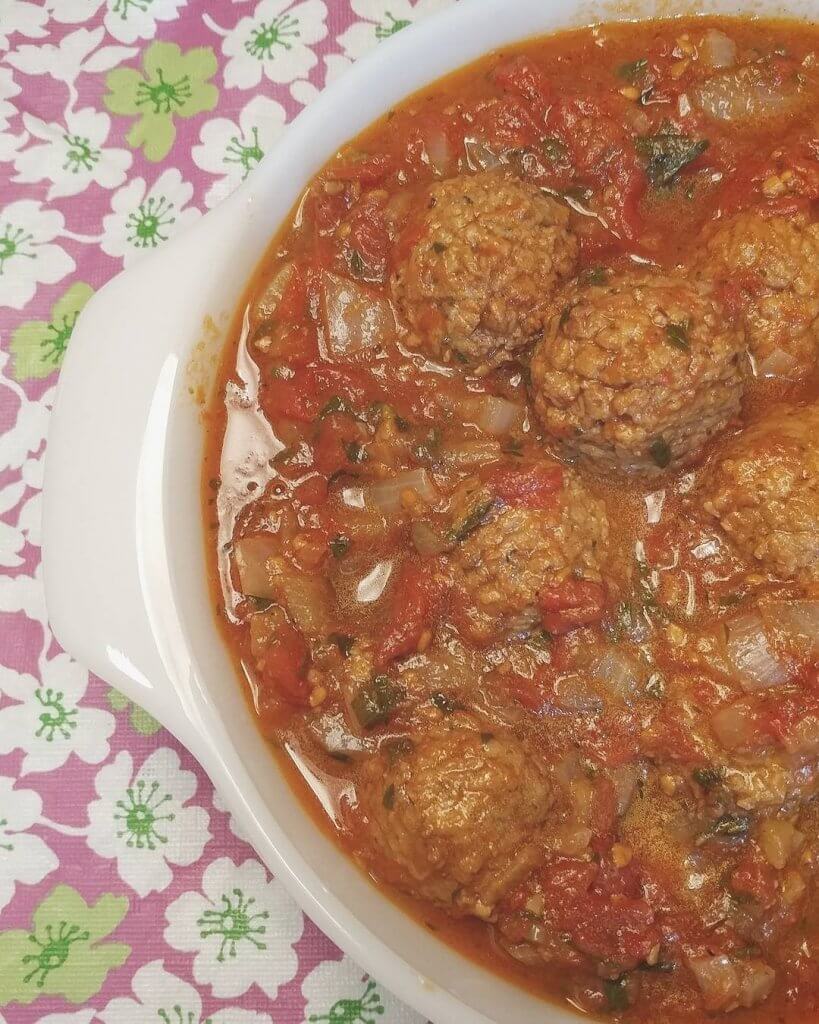 I saw this meatball recipe on Syrian Cooking in my hunt and it called to me. Traditionally made with beef or lamb meat, I chose to go the super easy route and get Gardein meatballs. Simmered in onion and fresh peeled tomatoes, seasoned with a Syrian spice called Bharat that I was able to whip up from my spices on hand, and parsley. These were really good too. I served them over plain white rice. 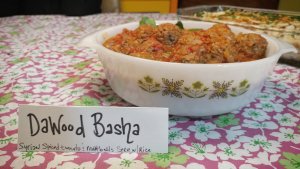 Angela made this really cool platter. Usually made with chicken, she used jackfruit that she seasoned with mesquite and pressure cooked to seal in the flavors. A simple swap of vegan coconut yogurt for regular yogurt and viola, easily veganized. This would make a great unique potluck dish.

Newcomer Myriam made these “lamb” kebabs out of Beyond Burger meat and lots of Middle Eastern spices. They came out wonderfully. The texture of Beyond Burgers are crazy good! 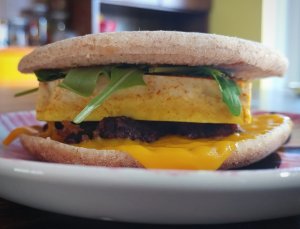 There were a few leftover, so I made a breakfast sandwich with the meat, Follow Your Heart american cheese, arugula, and a seasoned tofu slice. 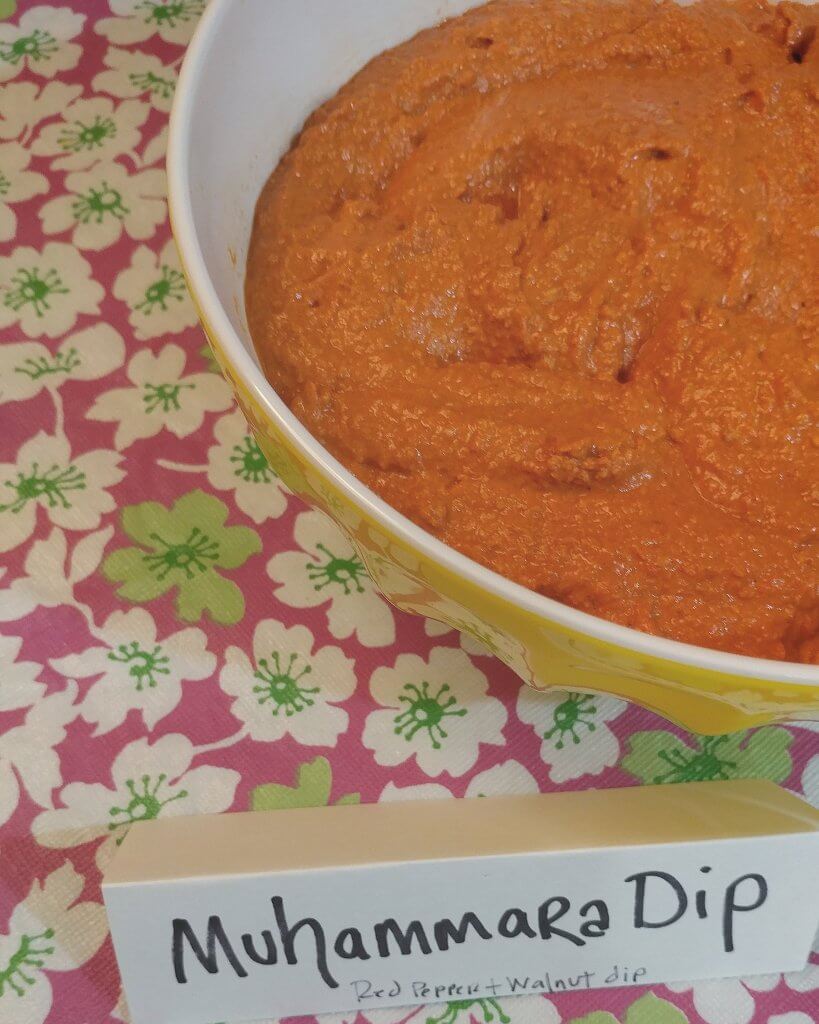 Rachel came this evening and made a red pepper dip. I intially was going to make this, but she took it on, and I’m glad she did, because it was great, and because it freed me up to make that meatball dish! With a base of roasted red peppers, walnuts, and tomato paste, this dip really felt like a hummus, but wasn’t. Not too spicy, just right. She got her recipe from Simple Vegan Blog.

I feel bad that Julies dish always comes last and rarely makes it to the plate, but that is just the misfortune of the dessert. And the only misfortune, because it tends to steal the show for my sugar loving self. These shortbread cookies were superb. I definitely ate more than one! My four year old son enjoyed one Thur night. On Friday he was playing with the parties place card tents, as he tends to do, but this week he was holding one up and making a weird whiny sound. Tapping me over and over going “mmm…mmm…mmm” it took me a few minutes, but I noticed the card he was showing me was “Graybeh.” He must have made a connection with the letters on the card with what that dish was and was asking for the cookies specifically. He said “I want more of this food.” This is crazy to me! It’s like something I read in my psychology books on rewards and recognition.

That’s all folks…most likely just going to hang out next week and not do food. I initially picked Liberia, but I was really uninspired, then I thought, maybe St Pats, but meh…simple hanging is good to throw in too.