This week we had some amazing food from Spain. The food was exceptionally beautiful and tasty this week.

This paella was fantastic! I got the recipe from Sweet Simple Vegan, Loaded Veggie Vegan Paella. Tons of veg, bonus points for no oil. It made a TON but I’m not mad, we’ve been enjoying our leftovers and had plenty to share. Totally recommend their recipe!

Got the chickpea and spinach recipe from Simple Vegan Blog. It was very tasty. A whole head of garlic went into this dish! House smelling awesome.

I just realized both blogs were “simple” that wasn’t a part of my search terms, but I have to say, both were quite simple to make. 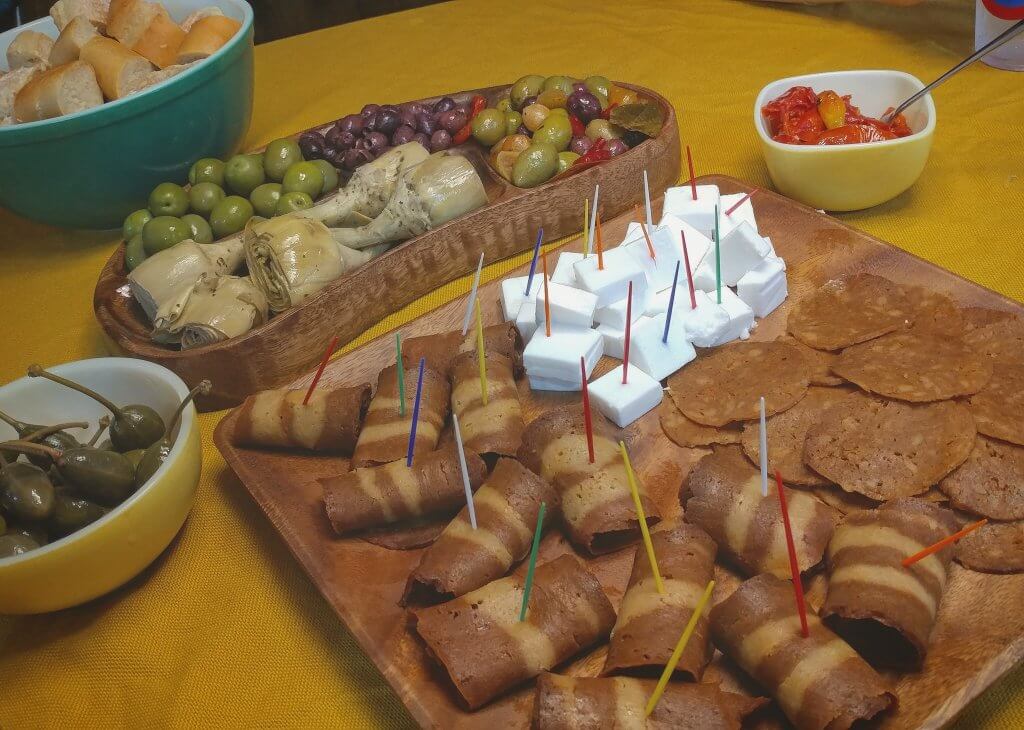 Thank you Wendy for putting together this beautiful display of vegan meats, cheeses, olives, oils, and breads. The meats she acquired from a local vegan deli, District on Mills. We are so very lucky here in Orlando to have a wealth of vegan resources. Here is Alter Offerings bacon and chorizo, for our purposes they made a perfect prosciutto and salami. The cheese here was to be a manchego, we used VioLife Feta which was MIND BLOWING! Go buy this stuff and melt with delight. Also an assortment of olives and some lovely marinated artichokes for the board. A friend of mine recently visited Spain, and said they ate a lot of bread dipped in a tomato oil. I took her recent culinary experience abroad and suggested to Wendy to add it to her selection, as she was already planning to bring bread and oils. So glad that conversation happened, because the oily sweet tomato crushed up on the crusty bread was delightful. Bravo! 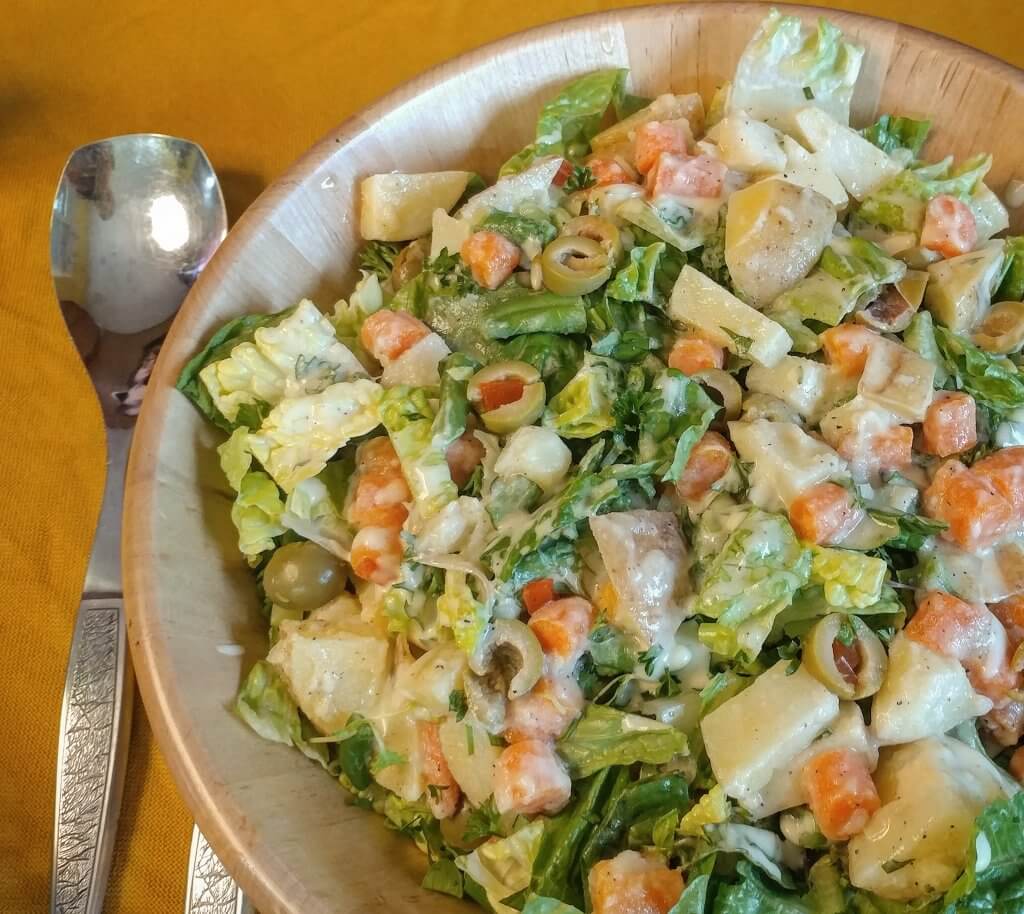 Ensalada Rusa is a Russian salad that is very popular in Spain. I’ve had some versions of this before, and this was by far my favorite. Holly got her recipe from Veg Recipes of India. I never realized how great parsley and potatoes are in a salad! I am going to add fresh parsley in all my salads from now on!

A classic tapas recipe. I have never had this stuff before and WOWZA this sauce is a dream! She got her recipe from Spain Recipes, but didn’t deep fry the potatoes. I am a sucker for mayoketchup, and this was a pleaser! I’ve got some leftover sauce and so far I made an amazing tofu scramble over grits topped with a baked potato tossed in the magical sauce, and a baked potato with lentils I seasoned to have a burger flavor topped with the “secret sauce” and pickles…. 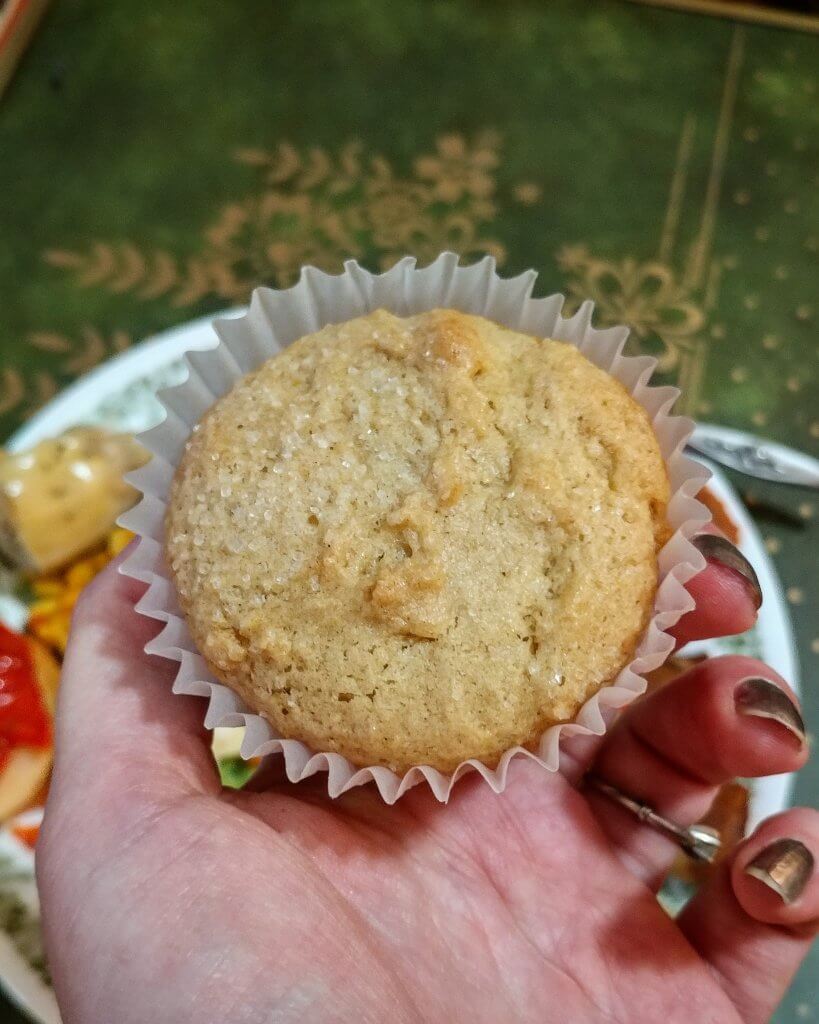 Poor Julie rarely gets her dessert on the plate. She brings desserts almost every week, but they either don’t fit on my saucy plate, or she comes just after the photos have already been taken. These little muffins were fantastic. I think I got a thing for lemon cake. These guys had a crispy sugar top, I ate more than one, I’ll just leave it at that.

Wendy also made some Sangria Mock-tails. She used this recipe from Dessert Now Dinner Later for her virgin concoction. Ginger ale based, it was the perfect mix of sweet. Special cameo appearance by Carl, our favorite vegan pup.

Next week we will celebrate on Friday for Liberation and Resistance Day in Lebanon.