Day of Uprising Against Occupation

So a brief history of our evening…

“This state holiday is always celebrated on 27 April. It may also be known as ‘Day of uprising against Occupation’ and in Slovenian, it is known as ‘Dan upora proti okupatorju’.

Resistance Day commemorates the establishment of the Slovenian Liberation Front in 1941.” (Office Holidays)

Now onto the food! 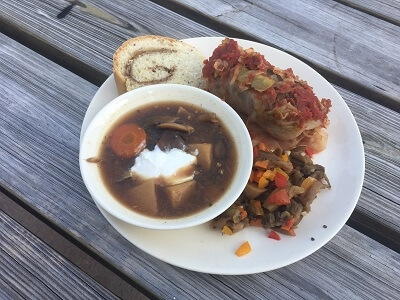 Not the most colorful presentation, but everything was scrumptious.  Here we have some mushroom soup, potica, cabbage rolls, and aubergine and pepper caviare.

So I chose to make Slovenian Style Stuffed Cabbage Rolls.  They were pretty tasty.  I am not the biggest fan of cabbage rolls.  I hated them when I was a kid, but I’ve come around on them and these were good!  Funny for a person who doesn’t love cabbage rolls I have two of my own cabbage roll recipes now!  I think next time I’ll make it deconstructed like my other recipe for Deconstructed Stuffed Cabbage, because I had a hell of a time boiling that big old head of cabbage.  Brian and I nearly scalded ourselves dropping it into the vat of boiling h2o.  Then taking it out it dropped and splashed on me.  It really was a mess.

To make these rolls “Slovenian” the common thread was covering those bad boys with sauerkraut.  I used Trader Joe’s Raw Fermented kraut, and they had little pickles in there, which gave them a nice touch I thought.  Another thing that made these Slovenian style was cooking the onion first in bacon fat or lard.  For mine I used Earth Balance and some Bac’n bits, used crumbled tofu for the beef, and a half a package of Gimme Lean Lightlife Sausage.

Click here for the recipe for my Vegan Slovenian Style Cabbage Rolls, or scroll on to the bottom of this page.

I didn’t take the best photo of this soup unfortunately, but it was very good. Danielle used a recipe from Homemade Slovenian Food, but made a few modifications.  She used 3 kinds of mushrooms, Baby Bella, Shiitake, and Porcini.  Click here for Danielle’s recipe or find it at the bottom of the page…you know the drill.

Ann made this yummy side dish…Here’s her experience…

“I do my grocery shopping on Sundays and don’t cook until Wednesdays so I look for ingredients that will keep that long or that I can freeze. Also, since I don’t normally cook, I obviously look for something that’s going to be super easy and quick.

The only tricky thing to this recipe was the eggplant since it’s been a long time since I’ve cooked with fresh versus frozen. I wish I had known to skin it before cooking it, which was difficult.

I see this recipe as a refreshing, cool “summer salad” though I suppose you could also treat it as a dip with some nice crackers or pita bread 🙂“

I agree that this one would have been awesome with some crackers or bread.  If we were to make it again that’s how I would serve it.  Some modifications she made from the original recipe from All Easy Recipes.

“-Served 2-4, so I used 2 eggplants instead of one & used a whole bag of the smaller peppers – also to add variety of colors
-Didn’t specify how long to cook the eggplant, but I did mine for about 30 minutes
-Would also like to add to skin the eggplant BEFORE cooking
-Left out the onion because Scott had used the one I had the night before & didn’t have time to go to the store to get another one
-Substituted olive oil for salad oil (peanut oil & vegetable oil were other substitutes, per google search)
-Didn’t have straight up vinegar so I used white distilled vinegar
-The “very little vinegar” it called for, I used about 2 teaspoons“

Eggplants can be very “high maintenance” so I try to use Chinese eggplants in most recipes. They do not need to be peeled or seeded, and don’t have the bitter flavor that most eggplants have.  I hear in California they are available at most supermarkets, but here in Florida I have to make a stop at the Asian or Indian Market, Clemons Produce has them sometimes, but I can’t depend on it.

I had a bit of this stuff leftover from Thursday and I added it to some pita pockets with seasoned lentils, spinach, and a creamy cucumber sauce. Great addition!!

Julie made this rockin sweet bread.  It was neat to have a dessert offering on the table this week.  Loved this stuff…maybe too much.  I cut myself a large slice for leftovers and ate the entire thing like a starving rat in my kitchen the next morning.  Loads of recipes this week.  Click here for Julie’s Potica or find it below!

So that’s it for Slovenia.  A few of our contributors couldn’t make it this week, but it was still a great variety and enough to fill all our bellies!  Next week I’m still working out, but I’m pretty sure we’ll be celebrating Star Wars Day…

Adapted from Roti and Rice.  Currently a placeholder. Waiting on Instructions.  Will edit when complete.